And that's it! Last week, the last course, last Q & A with John, also very interesting. He answered all our questions about the animation industry (mainly video games and film). The course dealt with walks with different weights and takes stock of what we saw this quarter.

For homework we have to put in a video all of our work this quarter :


See you next year for a new term: Class 2 - Psychology of Body Mechanics!!!


That is almost finished. This week we had the last duty to make (a walk with the character and a balance pose). The course covers the following concepts covered in week 7 of the curves of movement. A little complicated to explain here, but to summarize: it is technical. The refining of my work (step where we thin the movie) went pretty well, I begin to find my way of working, and that's cool.

My mentor has corrected some parts of my animation, the hips needed to be a little bit more pushed. John really liked my pose, he said that I had a really great feeling with every parts of the body.

Week 10 - Introduction to Walks with Character

The course dealt with the subject of duty, do a walk with character. The walk of last week was indeed a "standard" walk, with no personality and "normal" character. This week it is adding a state of mind in the walk, the character must show a sense of our choice.
As the previous step, first the Blocking (poses major) and the week after the Refining (fluid).
For the other assignment, an exhausted pose. 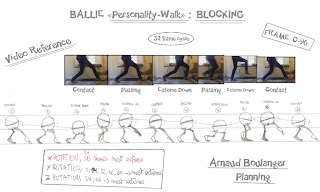 My Mentor has made some remarks on my walk but he rather liked it. It is the same for the exhausted pose, he liked it even if I had to deal with some changes.

End of another week! We talked about exaggeration and weight. Finally, most of exaggeration. The idea is that if you copy a real action (such as a video) frame exactly as it is (like a jump or drop), it does not work visually. Nobody really knows why, but we need to exaggerate life to be credible to the image. The weight can also make a credible animation, since any action requires energy and causes a reaction. For example, if a character is sitting on the floor and gets up, we will have a variety of ways to show he displays the energy to lift the weight of his body.
Next duty, we should finish our animation walk, and take a break for concern.

My Mentor has enjoyed my work and my pose, he gave me some corrections, especially in the pose that he would have seen a little more exaggerated. Next week we do the blocking of a personality walk, which means we add emotion to the character, it does not jusst walk. Finally, you'll see!

This week we did something a little more concrete, a walk. Or rather, the first step of a walk, called Blocking. It should seem a little jerky, but that's normal: indeed, we begin by positioning the main character in the poses and then use the computer to do the movements in between. But hey, we must not leave him too much work either, because it tends to make too perfect an interpolation between the two poses.
We also have to make a pose which represents a physical force. 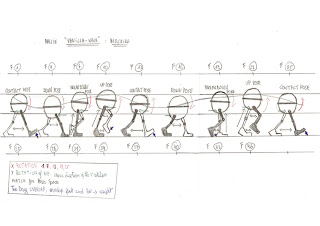 My teacher made a review rather short this time, but overall he liked my work, anyway stage blocking is very simple since it is only to reproduce poses. Next week promises to be much more full-bodied ...

This week was a bit more technical. The movement of objects is managed by the curves in the software corresponding to the different axes of rotation and translation. These curves are used to refine the motion until the object moves in the desired manner. It's very short but it's the idea.

This week we had to animate a ball with a squirrel tail. It therefore incorporates the principles of the pendulum from the previous week but this time the character has physical control over. In short, a very simplified squirrel.
I like to look like references before you start animating, even something very "simple" like that, the first two days were devoted to a search for videos of squirrels. Then I made my busy schedule and I hosted the ball in 3D, and finally the tail. Indeed, the movement of the ball is more or less independent of the movement of the tail, but of course the reverse is not true.


Overall, John liked it, he said a couple of things about Tailor's animation, the tail didn't seem to work as good as expected. When Tailor is sliding on the branch, the tail didn't follow correctly, so I had to rework that point, but at the end, he said that the animation was fluid and relevant!

Also in line with the 12 principles, overlapping action, follow through and drag, or words to define it a great concept: how to animate hair, chains, ropes, tails ... What a program.

This week the "assignment" was a rectangle with a bit what you want, as long as the pendulum is hung reacts realistically. It was also planning to make this animation, and, optionally, correct animation of the last week with the remarks of prof.

That's what it gave:

My mentor congratulated me for the flexibility of the pendulum and the personality of the cube. But I could exaggerate some parts, mainly increase slightly more arcs ( mouvement must have an arcing path to look natural. But in general, he was happy with it!

Week 5 - Anticipation and squash
and stretch


This week we continue in the list of 12 principles, with the anticipation and squash and stretch. Anticipation is everything that precedes an action. For such a jump, the character must bend the legs and crashed to the floor (anticipation squash), jump to stretch and release all its energy.
Basically, to really simplify it into gear. The squash and stretch applies also more mundane: when an object hits a little soft soil, it crashed. And of course these three concepts apply ... In the bouncing balls!

The assignment this week was to have the animation  of a bouncing ball through an obstacle course (the ball should start his own will and act as a simple basketball in the rest of the course). Also the planning of that animation, as well as a pose of "devastation", including sadness, in French. 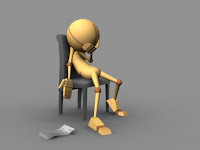 Obstacle Course (including the planning);

My mentor really loved my "Obstacle Course", he said that it was terrific, the only thing  he noticed was the main aspect of the animation, a little too "reserved", he thought that I could push things a little bit more. But otherwise, he liked it! :)

Week 4 - Introduction to Timing
and Spacing


Timing and Spacing. Two other key concepts in animation. They set the pace of the animation, its time, its intensity changes. We can even compare the animation to a piece of music. The lecture was focused on the application of these concepts in real life and animation.

We had "only" an animation of two bouncing balls to make a light and heavy, and the planning of the animation ;

My mentor liked my planning and my animation, he thought that it was clever to use different colors, he also found very cool the crave and the crush of the heavy ball. After seeing my animation a couple of times he realized that my light ball needed a little bit more spin and my heavy ball has to bounce more and go further before hitting the light ball. It was a very interresting week!

This week we approach the working methods. The very important step in the preparation (or Planning), which means to shoot or find videos on the Internet (references), draw (sketch poses) and of course think and view the best animation in his head before they animate and finally, the "workflows", or methods of animation. There are three main, the layering, pose to pose and staight ahead.

And the assignment, a page of sketches which relate to excitement, choose one and use it to pose STU. The second "duty" was to animate a basketball or a football bouncing off 4 seconds ; 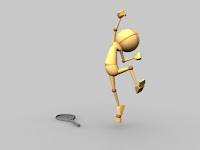 Bouncing Ball (including the planning) ;

New critic and new ideas : once you have chosen a pose you should not hesitate to rework it to find variations that could better make the expression or feeling desired and avoid excessive search and edit the 3D pose, because it is much faster on a sketch. Thanks John!

Week 2 - The Principles of Animation


The 12 principles of animation are both basic knowledge and an art that takes years to master. This week, Carlos Baena has reviewed each of them, For the first exercise, we had to draw people on the street, choose a drawing, rework it, and do it again in 3D with STU, a character rigged and provided by Animation Mentor.


Here is the result of my work; 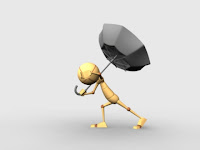 After my mentor's critic, I learned two things : you have to spend as much time as possible on the drawing (planning) and be careful not to ask too many external advice, because they can quickly drown in a flood of all different opiniond from each other.


This week has been pretty quiet. The only duty we had was to fill the profile page (name, photo) and to report to our mentor during the hour of Q & A (question - answer) or by mail. Not much to say so, except that during the first video was pretty cool. It was not really a pure court of animation, but rather a presentation of some teachers (mentors) who told how they got into the animation.

My mentor name is John Nguyen. He has been working on Transformers, Tron : Legacy, The Mummy : Tomb of the Dragon Emperor, The Day after Tomorrow,... Here is his website if you want check his work;