Well, slowly but surely we reach the end. Lot of Stuff to learn, but also a lot of stuff learned. I hope I can come back from vacation with a brand new brain, so that I can quickly put all the shots I want in my reel, and move to a new plan. I still think that this assginment has been great to me. I learned a lot, but I think I'd rather have a plan shorter and nicer than my dialogue shot in Class 04 for my demo.

And here is my Progress Reel for Class 5:

Here is also the critique for the term :

Last week to work on the animation! Still a lot of stuff to do, but I still have time to do them in Class 6.

Matthew Munn explains us what the Subtext is. It is told by the animation and acting that the character is thinking. Sometimes a character will say something different from what he thinks (lie, among others) and it will be in his gestures.

For the assignment, we continue.

Kenny Roy shows us this week how he works on an animation during the Polish stage.

Dave Mullins analysis for us how actors plays in different film clips, to show us all the ideas that can convey just by the look and posture.

This week Doug Sweetland talks about  Entertainment, or how to make an interesting scene.

And we keep working on the sequence :

Bret Parker shows us step by step her work on a shot of Ratatouille when Rémi found a fungus and he shows it to Emile who is in the trash. Very interesting again.


We continue on the animation :


Continue. We are also pursuing the course of Victor Navone's animation. Long, but interesting.

The sequence, this week I detail the plan 2. I have advanced on the man animation, but I still have all the lip sync, a little polishing and of course the animation of the woman.

New week. Victor Navone gives us the first part of a course that runs from A to Z plan monologue. A bit long but interesting.

And we continue to detail the animation. Blocking of plans.


Jason Schleifer gives us this week a course on the management of different characters in a shot, all the main characters as background characters. How to direct the viewer's eye, by restricting the movements of the characters on which they do not want attention for example.

For the assignment, we attack animation. A very rough blocking at the moment so with just the keyframes to define acting and also a little extra exercise to do (the three images below). 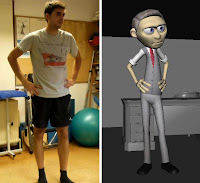 T.Dan had a lot of notes on the acting, which for him was not quite exaggerated and pushed.

This week Patrick Kriwanek gave us a very interesting lesson on staging and compositing.

Otherwise we had to make the animation sequence planning.

T.Dan gave me good notes on how to improve my sequence, make it more "entertaining".

Let’s get’s started! My mentor this term is called T.Daniel Hofstedt, he has been working as a character animator since 1999. He got his start in Stop-Motion working on MTV's Celebrity Deathmatch where he animated and supervised for three years before moving in to the world of computer animation at Blue Sky Studios. After animating on Robots, Ice Age 2, and Horton Hears a Who, he took a two year hiatus from Features to backpack through the Appalachians and work as a freelancer in New York City. In 2008 Royce returned to feature work at Pixar Animation Studios, working on a number of projects including Partly Cloudy, Cars 2, and Toy Story 3. Currently, Royce is hard at work on their next feature film, Brave.
He is a great guy and  you can find his website by clicking on the link!


My class is on Thursday at 6 am ... I have chosen taht and I think it will be worth it. Plus I'm with friends.


It is JB (the master of the funk) ho gives us our first lecture this week.
Well he is called James Brown but he is a master in animation. He shows us how he works on a plan of animation from start to finish, focusing instead on the choice of acting and staging compared to the audio he chose. So very interesting, especially as the final animation is great.

The assignment for this first week was to find extract audio from movies with the following criteria:

They could have added that you can endure for three months and you will not regret in the first week of work. I had a few criteria from myself, I wanted them to have the pace and humor found in the animation. My previous plan was slow and intense, so I want to explore other horizons. These are the ones I chose:


T.Dan rather liked my choices, some tips and notes.